The Naomh Mearnóg Nursery runs on Saturday mornings from late August to June (excluding bank holidays) for boys and girls aged 4 to 7 years old and it is the perfect induction for all those budding future stars of Dublin GAA!!

The ethos of the Nursery

The nursery is, first and foremost, about fun and enjoyment for the children and provides them with an opportunity to make friends and get used to playing and sharing with other children. They will learn the basic motor skills of Gaelic games and will participate in small sided matches.

The nursery is managed by Games Development committee and Ronan McDonald, our Club Coach who is a familiar face to those who attend the local schools as he coaches in all of the local primary schools during the week. David is ably assisted by a team of parents who volunteer and help to run and co-ordinate the drills and the matches!

There is also a coffee shop which runs in the clubhouse on Saturday mornings where children and parents get to unwind and relax and meet other families after their activities!! It is the place to be for a family on a Saturday morning in Portmarnock!

Aims of the Nursery

Approximate age: 4-6 years
Should be about fun and participation with key emphasis on physical literacy and core movement skills with the ball. Learning to use the ball well.

Player Characteristics
– Children of this age are self centred and co-operation is largely absent.
– At this age many think the ball is there own ‘toy, so they will try run with the ball and score rather than pass.
– They will respond to partner work and skills practice for a short time. This helps introduce them to team work and co operation .
-These children will only watch the ball.They cannot and will not look for space to run into.
– They usually enjoy being asked questions and this should give the coach opportunities to check for understanding.
– When there team is not in possession they find it difficult to defend there goal. To them they are merely chasing a ball.
– They respond best to target games and races. (Hitting, Throwing & Running).

BALANCE
For example:Animal Walking,
Hop I and out of hoops.

Target Games
The simplest form of a game which challenges players to use the techniques previously learnt is to aim into or at a target. Players have lots of
Time to perform the task without any distraction from other players. There is a low level of decision making.
For example: Skittles, Through the gate, Tower ball.

Court Games
Court games require players top pass the ball over an obstacle like a net or zone to a receiver. The Level of decision making has increased but is
Limited.
For example: Over the river, hurling tennis

Part – Invasion
These players require a player to complete a task with limited or direct opposition.
For example: Getting through the traffic, 4V4 ( 2 zones) no
goalie,Up north down south

Approximate age: Age 7-9 years.
Major skills learning phase where all the basic skills in football and Hurling are learned. 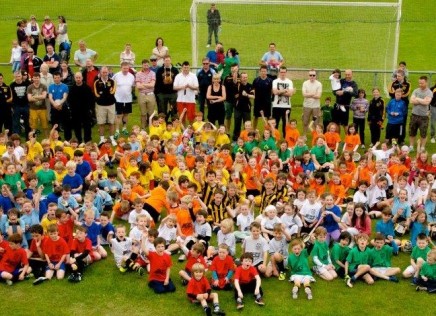